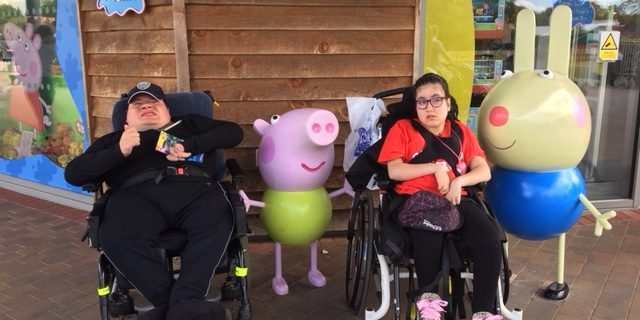 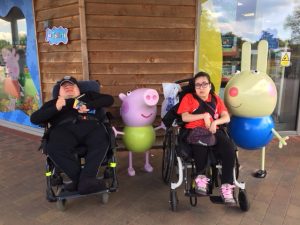 On Friday I drove down to Bournmouth when we got there we went to the Premier Inn West Cliff. The hotel was accessibale our room was qite large whith 2 beds in it. It was ok to get my chair around the bed room so I cauld get to my bed easly. The bathroom was a bit smaler so I cauldent get in there. After we freshend up in our room we whent back down in the lift and then we whent out around the town. The town was in walking distence from our hotel so we dident need to get back in the car.
The town was pritty flat and accessibale it had traffic lights whith crossings on so I could cross easiley. At one point when I was crossing the road there wasent a drop curb which made it very hard for daddy to get my up the curb on the uther side.
We whent in a coupel of shops in town one was really accessibale the uther wasent as accessibale but that is ok I dident need to get to the area that wasent accessibale.
We walked around for a bit then whent into a micro bruwory and had a look in side. It had one step to get in but then it had thin duble doors to get thrugh. A ladie came and opend the duble door for me so I could get in she said they had a ramp in the back but Daddy had all ready started lifting my chair in. we had a drink in there and then walked back to the hotel.
We got back to the hotel and whent to the bar and had anuther drink while we waited for our frends to come. A little time later our frends arrived and we sat and had a chat to them for an hour or so. The bar was accessibale in the hotel I was able to get undernethe a table to have my drink.
A bit later we went into the resturant for dinner in the hotel I cauld get raund a bit but some people had there chairs stiking out so it was hard to get araund. Dinner was nice with good company.
After dinner we whent up to the bedroom to chill out for a bit before bed.

Saturday morning I woke up and had some chill time on my iPad. We got up and dressed and whent down stairs and had some breackfast in the resturant. it was all you can eat breackfast but I only had a youghurt becouse I dident feel like haveing a full breackfast. I sat and chaterd to my frend for a bit then we got in the car and whent to sandbanks beach. When we got to sandbanks beach we got out the car it was a nice sunny day I had my go pro ready and got all the things I needed to go on the beach. We walked thrugh a car park then we whent to the beach office. It had a ramp and automatic doors to get inside so it was very accessibale. There was lots of leaflets of things to do and places to visit around Bournmouth it was like a tourist information center. The ladey behind the desk said that 2 boys wauld get the beach chairs out for us to have a look at. We saw the chairs one had orange sides that come up and down to transfer easayer the other one had really big wheels and arm rests. It looked like a normal wheelchair that you cauldent slide to transfer in to. I dident go into the beach chair becouse it was a bit to cold for me in the sea but I still wanted to see the beach chairs. We thanked the ladiy and left back down the ramp I did a bit of filming on my go pro wich I will post soon. We Whent a walk down the jettey to the end then we turned araund and came back to the car. We got back in to the car and headed to anuther beach we dident get out the car at the seacond beach our frend did and she said it was accessibale and flat. 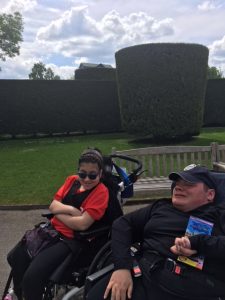 We set off to Bournmouth beach When we got there we got out the car and walked towards the amustmants arcade. We whent in side and I had go on some slot michines for a bit then we walked araund the sea front next to the beach huts. After we stopt at an ice cream hut and I had a strawberry ice cream we had a little sit down while I eat my ice cream then we whent back to the car and whent back to the hotel.
When we got back to the hotel we whent to our bedroom and had some chill time before we whent down stairs for a drink then whent in the resturant for dinner. After dinner we whent out side the hotel for some fresh air and to look at the night sky. It was beautiful it was redish and dark. Then we whent up to our bedroom had some chill time on my iPad before going to sleep.

On Sunday we got up and got ready and whent down stairs.we had some breackfast again we loaded the car and got ready to go to Paoltons Park on the way home. It took a little time to get to Paultons Park but when we got there I was excited. We whent to the gate but they wauldent let us in becouse it was the fast pass gate so we had to walk to the uther end to get in. Mummy gave the woman her phone to look at with the ticket on the woman caunted us all then let us in. The gate was good and wide so I cauld get thrugh easiley. After the gate we whent thrugh a building and to guest services where we tryed to get our wrist band but they said we had to go to first aid to get them. We collectd them then we explored the Park.
The first ride I came to was the carasel they had to get some speaciel people to come over to get me and my frend on the ride. They only had 1 wheelchair space on the ride so I had to whait for my frend to go on first before I could have a go. I really enjoyd going on the carasel but it wauld have been better if they had 2 wheel chair spaces so we cauld have gone on the ride together.
The only uther ride we cauld go on was the train. The train was good it whent all the way araund the park the train was beter becouse you cauld fit 2 wheel chairs on at the same time so we cauld both go on it together.
After we walked around Peppa Pig World there wasent eney rides we cauld go on there but it was nice to walk araund in the sun shine whith my frends and family.
We saw 2 charicters Peppa and George on a stage performing and children was haveing photos with them. My mum asked if they wauld come off the stage for a photo but they wauldent so we missed out becouse we cauldent get onto the stage. That made me feel very sad and disaponted and a bit angery becouse I dident get to meet them becouse im in a wheelchair. That’s not fair.
We whent into the peppa pig gift shop and bought a few things before we had a photo with a small model of George and Peppa Pig. Then we whent into the playground we cauldent go on any thing in the playground ither.
We went to Miss Rabbit’s Ice Cream Paurlour I had a strawberry ice cream with strawberry sauce and a chocolate flake. The staff were very frendly and it made me feel happyer again.
We whent to Little Africa where they have all meahakats in a little area then we did walk raund a bit. We whent to watch the penguin feeding time show then I whent to the changing place toilet.
The changing place toilet was a big square room it had plenty of space and a mobile hoist and a hight adjustibale plinth but it was connected to the wall so mummy and daddy cauldent get both sides of me. The room was clean and fresh. I was happy to use the room and go on the plinth.
After exiting thrugh the gift shop we whent back to the car and whent home.

My rocking helicopter chair
20th May 2020