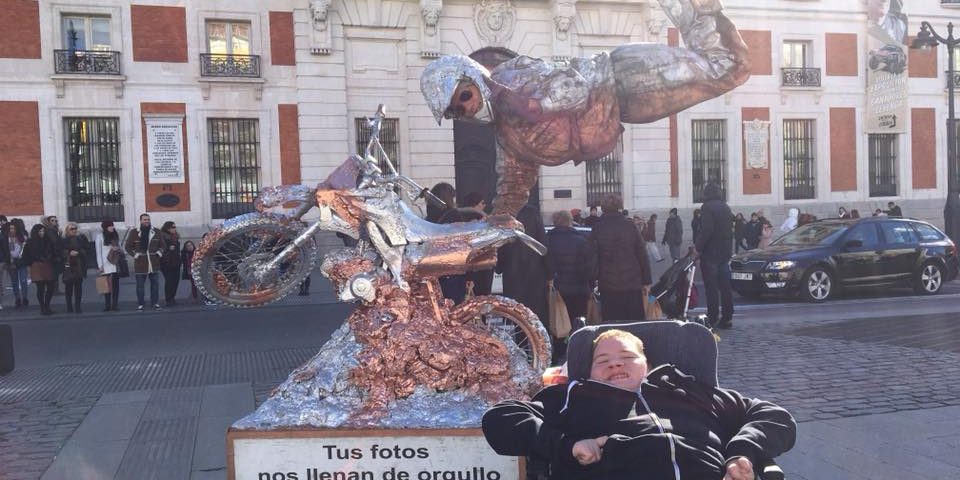 My trip to Madrid – Febuary 2018
Hello frends, I have recentely been to Madrid on a little holiday with my mum and dad. We flew from Birmingham Airport to Madrid Barajas International Airport. Birmingham Airport facileteys were good, it was accessible through the airport but they dident have a changing places. Birmingham Airport has an ambulift that I used to get onto the plane, we were seated right at the back of the airplane so access was pretty good. The flight was good it was a two hour flight, I had a seatbelt extention so it wasent to tight on my belly so I was comfortibale juring the flight. When we arrived at Madrid it was not good I had to wait to long to get off the plane becose I had to wait for the lift to come. I had to wait about an hour after every one else had got off the plane before I could get off it meant I was now kwite uncomfortibale. Madrid Barajas International Airport was kwite accessible getting to the baggage claim and though securty. When we came out of the airport we found a taxi with a manual ramp that came out the back to push me in then we went to The Crown Plaza Madrid Airport Hotel. This hotel was relly accessible they had a drop cerb to get to the door we went through a large revolving door that was manual so you could control the speed we went though. To get to our room the hotel had lifts from the lobby the lifts were kwite big so we could all go in toghether. My room was big it was accessible we had two double beds and a large bathroom. We had a seprate bath and shower which was nice but I couldent get to use them. The hotel had a nice bar area it was all accessible to get around but the tables were ither low so I couldent rech them or hirer but not kwite high enouth to get underneth.

The Crown Plaza Hotel had a big restaurant and I could get underneth the table to eat my dinner. We all had a lovly meal in there before going back to the room to chill. We only spent one night in the Crown Plaza Hotel becose there wasent much around in walking distanse. The next day we got a taxi to The Intercontinental Madrid Hotel when we got out the taxi the concierge was verey helpful they took our luggage to our room and took me to a seprate manual door as I wouldent have been abale to get though the revolving door. It was a lovley hotel that was accessible it had the reception desk at the front and lifts at the back in the entrance but the lifts werent that big we couldn only just fit in together. We had a club room in the Intercontinental Hotel Madrid our room was bigger than the last room we had but the door way to the bath room wasent big enuf for me to get through. The layout of the room ment I couldent get my chair all the way round the bed becose the second bed was in the way and it was kwite tight. The club lounge in the hotel was accessible the staff opend the doors and made me feel welcome. The tables were accessible to get under the food station was accessible and I could get my own food if I wanted to it was great.

On our first full day in Madrid we went out exploring the local area we got on a bus to the city centre. The bus was one of the bendey buses and double doors in the middle opend and a ramp come down for wheelchair access. This was brillient I was abale to get on the bus esaly with out any extra help. We walked around the city center and down the hill to the market square where the bear and the strawberry tree statue is and I had a photo there. Around the Market Square it was coboles on the floor becose it’s really old it was accessible but it was rather bumpey. We walked around the souvenir shops and explored the city then headed back to the bus and back to the hotel for some thing to eat. 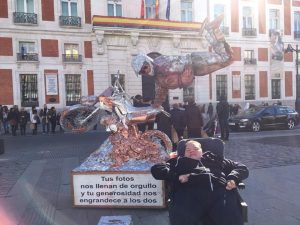 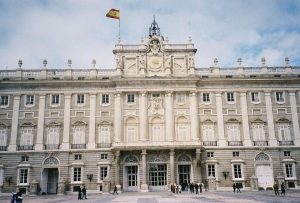 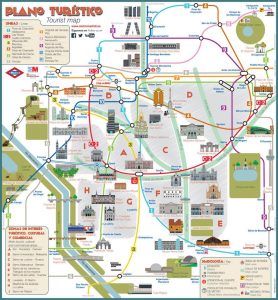 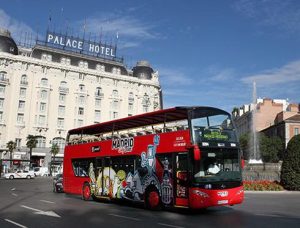 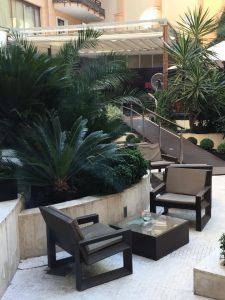 The next day we went out in a taxi to the Gran Plaza 2 Central Commercial from the car park we had to get a lift down to the right floor to be able to get a difrent lift to the shopping Centre. Inside the shopping centre it was flat and accessible. Some shops were really accessible others were a bit tight to get around. We found a supermarket called Alcampo in the shopping centre on the ground floor so we looked around that and it was massive much better than the supermarkets we have in the UK. To get upstairs they had travellators which where great and esey to use. We walked around and looked in a few shops. We had lunch at the food court in the shopping centre before we went back down the travellator. Mum booked a taxi at the Guest Services inside the shopping centre and they called the taxi company and got us a taxi back to the Intercontinental Madrid.
The next day we took a walk up to the big department store in Madrid City Centre called El Corte Ingles. It was a massive department store better than back home. it had jeolery, perfume, clothes, desinger brands, supermarket, toy department, DIY section and even its own carpark underneth. After the department store we walked back to the hotel to chill out for a bit.

On our last day we whent on a sight-seeing bus tour we saw lots of amazing bildings like churches, the Royal Palace that has been restord, other palaces that nobal men lived in, a grand cathedrale and lots of other cathedrales. My favrite thing I saw on the sight-seeing bus tour was the Royal Palace. On bus tour we jumpd of at a stop and we whent to anuther department store I really enjoyed looking around that.
Madrid had lots of beutifal water fountens and status around the city centre that I enjoyed looking at. There was also lots of street preformes in the main market square and you were abale to have photographs with them for a tip.
The taxi that picked us up to take us back to the airport had the same driver and he was really good. The departures side in the airport in Madrid was accessible and security was pretty good. Getting onto the airplane to come home was really simple becose it was a tunel to get on and we were siting third row from the front. The flight home was pretty smooth once it was in the air but it was a little bit bumpey when we landed in Birmingham. When we landed we had a problem getting of the airplane becose they couldent get me of the front of the plane becose they dident think the ambulift could get to that door. I had to wait until every one was off the plane before they would help me. I had whated so long that they had started leting people back onto the plane for the next flight before I was even of! The staff finally got the ambulift to the very front door on the opisite side which was a fire exit door and I had to go though the kitchen to get of the plane. It was kwite a distresing sitution for all of us which I hope I dont do again.
Once I was finally off the airplane it was easey going straight through passport control UK border then though baggage claim becose we only had hand luggage.

My final thorts on Madrid – I reley enjoyed Madrid it was very culteral and had some beutifal things to see. It is a verey clean city but the drains were blocked which gave off a very unplesent smell! The whether was nice and sunny for the time of year and it was pretty much accessible every where I visited. I would recommend Madrid for a holiday for people who use wheel chairs like me. I give it a big thumbs up!

My rocking helicopter chair
20th May 2020